You are here: Home / Activists to know / Artists / Jie-Song Zhang 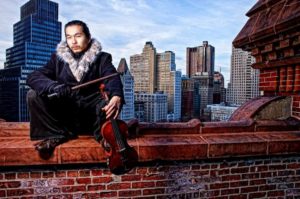 Jie-Song Zhang was born in Beijing, China, in the Year of the Monkey, later immigrating to the United States where he was raised and educated.

Jie-Song’s past work includes co-producing The Shanghai International Beatbox Competition, a national Chinese Hip-Hop event. Previously, he was a conceptual designer and consultant for LagosPhoto, the first international photography festival in the history of Nigeria (Lagos). In 2007, Jie-Song curated the Chinese contemporary art exhibition Red Blood of the Dragon’s Psyche, featuring the work of 13 Chinese contemporary artists, and showing in New York and Europe.

As a violinist and performer, Jie-Song placed 2nd in the infamous Amateur Night competition at the legendary Apollo Theater, and followed up with a nationally televised performance on NBC for Showtime at the Apollo (2003-2004). In 2010, he was invited by the USA Pavilion to represent American culture to the world at the 2010 World Expo, in Shanghai. He is also currently composing music for a discussed collaboration with Nneka and Keziah Jones.

Jie-Song has been an invited speaker and lecturer across the world. His recent notable speaking engagements include Amnesty International’s 50th Anniversary Human Rights Conference, TEDx StuyvesantHS, and the 2015 edition of Photofest, a National Geographic sponsored photography festival based in Mexico.