You are here: Home / Activists to know / Military / Edward Snowden 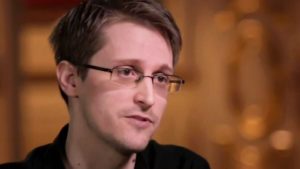 Edward Snowden is a former National Security Agency subcontractor who made headlines in 2013 when he leaked top secret information about NSA surveillance activities.

Born in North Carolina in 1983, Edward Snowden later worked for the National Security Agency through subcontractor Booz Allen in the organization’s Oahu office. During his time there, Snowden collected top-secret documents regarding NSA domestic surveillance practices that he found disturbing. After Snowden fled to Hong Kong, China and met with journalists from The Guardian and filmmaker Laura Poitras, newspapers began printing the documents that he had leaked, many of them detailing the monitoring of American citizens. The U.S. has charged Snowden with violations of the Espionage Act while many groups call him a hero. Snowden has found asylum in Russia and continues to speak about his work. Citzenfour, a documentary by Poitras about his story, won an Oscar in 2015. He is also the subject of Snowden, a 2016 biopic directed by Oliver Stone and starring Joseph Gordon-Levitt.

Edward Snowden was born in Elizabeth City, North Carolina, on June 21, 1983. His mother works for the federal court in Baltimore (the family moved to Maryland during Snowden’s youth) as chief deputy clerk for administration and information technology. Snowden’s father, a former Coast Guard officer, later relocated to Pennsylvania and remarried.

Snowden dropped out of high school and studied computers at Anne Arundel Community College in Arnold, Maryland (from 1999 to 2001, and again from 2004 to 2005). Between his stints at community college, Snowden spent four months from May to September 2004 in special-forces training in the Army Reserves, but he did not complete his training. Snowden told The Guardian that he was discharged from the Army after he “broke both his legs in a training accident.” However, an unclassified report published on September 15, 2016 by the House Intelligence Committee refuted his claim, stating: “He claimed to have left Army basic training because of broken legs when in fact he washed out because of shin splints.”

Snowden eventually landed a job as a security guard at the University of Maryland’s Center for Advanced Study of Language. The institution had ties to the National Security Agency, and, by 2006, Snowden had taken an information-technology job at the Central Intelligence Agency. In 2009, after being suspected of trying to break into classified files, he left to work for private contractors, among them Dell and Booz Allen Hamilton, a tech consulting firm. While at Dell, he worked as a subcontractor in an NSA office in Japan before being transferred to an office in Hawaii. After a short time, he moved from Dell to Booz Allen, another NSA subcontractor, and remained with the company for only three months.

During his years of IT work, Snowden had noticed the far reach of the NSA’s everyday surveillance. While working for Booz Allen, Snowden began copying top-secret NSA documents, building a dossier on practices that he found invasive and disturbing. The documents contained vast information on the NSA’s domestic surveillance practices.

After he had compiled a large store of documents, Snowden told his NSA supervisor that he needed a leave of absence for medical reasons, stating he had been diagnosed with epilepsy. On May 20, 2013, Snowden took a flight to Hong Kong, China, where he remained as he orchestrated a clandestine meeting with journalists from the U.K. publication The Guardian as well as filmmaker Laura Poitras. On June 5, The Guardian released secret documents obtained from Snowden. In these documents, the Foreign Intelligence Surveillance Court implemented an order that required Verizon to release information to the NSA on an “ongoing, daily basis” culled from its American customers’ phone activities.

The following day, The Guardian and The Washington Post released Snowden’s leaked information on PRISM, an NSA program that allows real-time information collection electronically. A flood of information followed, and both domestic and international debate ensued.

“I’m willing to sacrifice [my former life] because I can’t in good conscience allow the U.S. government to destroy privacy, internet freedom and basic liberties for people around the world with this massive surveillance machine they’re secretly building,” Snowden said in interviews given from his Hong Kong hotel room. One of the people he left behind was his girlfriend Lindsay Mills. The pair had been living together in Hawaii, and she reportedly had no idea that he was about to disclose classified information to the public.

The U.S. government soon responded to Snowden’s disclosures legally. On June 14, 2013, federal prosecutors charged Snowden with “theft of government Property,” “unauthorized communication of national defense information” and “willful communication of classified communications intelligence information to an unauthorized person.” The last two charges fall under the Espionage Act. (Before President Barack Obama took office, the act had only been used for prosecutorial purposes three times since 1917. Since President Obama took office, the act had been invoked seven times as of June 2013.)

Snowden remained in hiding for slightly more than a month. He initially planned to relocate to Ecuador for asylum, but, upon making a stopover, he became stranded in a Russian airport for a month when his passport was annulled by the American government. The Russian government denied U.S. requests to extradite Snowden. While some decried him as a traitor, others supported his cause, and more than 100,000 people signed an online petition asking President Obama to pardon Snowden by late June.

The following month, Snowden made headlines again when it was announced that he had been offered asylum in Venezuela, Nicaragua and Bolivia. Snowden soon made up his mind, expressing an interest in staying in Russia. One of his lawyers, Anatoly Kucherena, stated that Snowden would seek temporary asylum in Russia and possibly apply for citizenship later. Snowden thanked Russia for giving him asylum and said that “in the end the law is winning.”

That October, Snowden stated that he no longer possessed any of the NSA files that he leaked to press. He gave the materials to the journalists he met with in Hong Kong, but he didn’t keep copies for himself. Snowden explained that “it wouldn’t serve the public interest” for him to have brought the files to Russia, according to The New York Times. Around this time, Snowden’s father, Lon, visited his son in Moscow and continued to publicly express support.

In November 2013, Snowden’s request to the U.S. government for clemency was rejected. The fallout from his disclosures continued to unfold over the next few months, including a legal battle over the collection of phone data by the NSA. President Obama sought to calm fears over government spying in January 2014, ordering U.S. Attorney General Eric Holder to review the country’s surveillance programs.

Still in exile, Snowden remained a polarizing figure. He made an appearance at the popular South by Southwest festival via teleconference in March 2014. Around this time, the U.S. military revealed that the information Snowden leaked may have caused billions of dollars in damage to its security structures.

In May 2014, Snowden gave a revealing interview with NBC News. He told Brian Williams that he was a trained spy who worked undercover as an operative for the CIA and NSA, an assertion denied by National Security Adviser Susan Rice in a CNN interview. Snowden explained that he viewed himself as a patriot, believing his actions had beneficial results. He stated that his leaking of information led to “a robust public debate” and “new protections in the United States and abroad for our rights to make sure they’re no longer violated.” He also expressed an interest in returning home to America.

That same year, Snowden was featured in Poitras’s highly acclaimed documentary Citizenfour. The director had recorded her meetings with Snowden and Guardian journalist Glenn Greenwald. The film went on to win an Academy Award in 2015. Poitras and the winning team was joined onstage by Snowden’s girlfriend Mills, with the documentarian saying during her acceptance speech, “When the decisions that rule us are taken in secret, we lose the power to control and govern ourselves.”

Since its release, Snowden has remained outspoken about government surveillance. He appeared with Poitras and Greenwald via video-conference in February 2015. Earlier that month, Snowden spoke with students at Upper Canada College via video-conference. He told them that “the problem with mass surveillance is when you collect everything, you understand nothing.” He also stated that government spying “fundamentally changes the balance of power between the citizen and the state.”

On September 29, 2015, Snowden joined the social media platform Twitter, tweeting “Can you hear me now?” He had almost two million followers in a little over 24 hours.

Just a few days later, Snowden spoke to the New Hampshire Liberty Forum via Skype and stated he would be willing to return to the U.S. if the government could guarantee a fair trial.

The next day various human rights groups including the American Civil Liberties Union (ACLU), Human Rights Watch and Amnesty International launched a campaign requesting that Obama pardon Snowden. Appearing via a telepresence robot, Snowden expressed gratitude for the support. “I love my country. I love my family,” he said. “I don’t know where we’re going from here. I don’t know what tomorrow looks like. But I’m glad for the decisions I’ve made. Never in my wildest dreams would I have imagined, three years ago, such an outpouring of solidarity.”

He also emphasized that his case resonates beyond him. “This really isn’t about me,” he said. “It’s about us. It’s about our right to dissent. It’s about the kind of country we want to have.”

A day later on September 15, the House Intelligence Committee released a three-page unclassified summary of a report about its two-year investigation into Snowden’s case. In the summary, Snowden was characterized as a “disgruntled employee who had frequent conflicts with his managers,” a “serial exaggerator and fabricator” and “not a whistle-blower.”

“Snowden caused tremendous damage to national security, and the vast majority of the documents he stole have nothing to do with programs impacting individual privacy interests — they instead pertain to military, defense and intelligence programs of great interest to America’s adversaries,” the summary of the report stated.

Members of the committee also unanimously signed a letter to President Obama asking him not to pardon Snowden. “We urge you not to pardon Edward Snowden, who perpetrated the largest and most damaging public disclosure of classified information in our nation’s history,” the letter stated. “If Mr. Snowden returns from Russia, where he fled in 2013, the U.S. government must hold him accountable for his actions.”

Snowden responded on Twitter saying: “Their report is so artlessly distorted that it would be amusing if it weren’t such a serious act of bad faith.” He followed with a series of tweets refuting the committee’s claims and said: “I could go on. Bottom line: after ‘two years of investigation,’ the American people deserve better. This report diminishes the committee.”

Snowden also tweeted that the release of the committee’s summary was an effort to discourage people from watching Snowden, a biopic directed by Oliver Stone with Snowden’s cooperation and starring Joseph Gordon-Levitt in the lead role. The film was released in the United States on September 16.