You are here: Home / Muammar Gaddafi 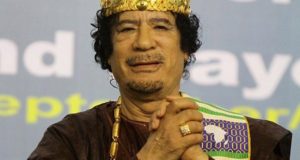 Whether or not Gaddafi was the horrible tyrrant to Libya that our government and media painted him out to be, is still a question to be answered. However, much of the Untold aspects of his regime, seem to paint an entirely different picture. Let’s look at some of the facts about Libya and the standard of living, while he was so demonized by the west::

• There was no electricity bills in Libya; electricity is free… for all its citizens.
• There was no interest on loans, banks in Libya are state-owned and loans given to all its citizens at 0% interest by law.
• If a Libyan is unable to find employment after graduation, the state would pay the average salary of the profession as if he or she is employed until employment is found.
• Should Libyans want to take up a farming career, they receive farm land, a house, equipment, seed and livestock to kick-start their farms –this was all for free.
• Gaddafi carried out the world’s largest irrigation project, known as the Great Man-Made River project, to make water readily available throughout the desert country.
• A home was considered a human right in Libya. (In Qaddafi’s Green Book it states: “The house is a basic need of both the individual and the family, therefore it should not be owned by others.”)
• All newlyweds in Libya would receive 60,000 Dinar (US$ 50,000 ) by the government to buy their first apartment so to help start a family.
• A portion of Libyan oil sales is or was credited directly to the bank accounts of all Libyan citizens.
• A mother who gives birth to a child would receive US $5,000.
• When a Libyan buys a car, the government would subsidizes 50% of the price.
• The price of petrol in Libya was $0.14 per liter.
• For $ 0.15, a Libyan local could purchase 40 loaves of bread.
• Education and medical treatments was all free in Libya. Libya can boast one of the finest health care systems in the Arab and African World. All people have access to doctors, hospitals, clinics and medicines, completely free of charge.
• If Libyans cannot find the education or medical facilities they need in Libya, the government would fund them to go abroad for it – not only free but they get US $2,300/month accommodation and car allowance.
• 25% of Libyans have a university degree. Before Gaddafi only 25% of Libyans were literate. Today the figure is 87%.
• Libya had no external debt and its reserves amount to $150 billion – though much of this is now frozen globally.

Gaddafi wrote, “They want to do to Libya what they did to Iraq and what they are itching to do to Iran. They want to take back the oil, which was nationalized by these country’s revolutions. They want to re-establish military bases that were shut down by the revolutions and to install client regimes that will subordinate the country’s wealth and labor to imperialist corporate interests. All else is lies and deception.”

Finally, the gold bullion held by the Libyan Central Bank (March 2011) was among the 25 largest reserves in the world, as reported by the Financial Times, citing the International Monetary Fund. This provided Libya a critical lifeline after billions of Libya’s assets were seized by the United States and the 27 member states of the European Union.

Many believe the NATO-led invasion of Libya was/is about oil and a vast wealth of other natural resources. Yet another critical element that few are aware of is the fact that Gaddafi had planned to introduce a single African currency made from gold. [Of this proposed African currency] Dr James Thring stated, “It’s one of these things that you have to plan almost in secret, because as soon as you say you’re going to change over from the dollar to something else, you’re going to be targeted … There were two conferences on this, in 1986 and 2000, organized by Gaddafi. … Most countries in Africa were keen.” This would have eradicated the US Dollar and Euro as trade currencies for Africa.

****There it is. He was trying to lift the continent of Africa out from the chains of resource slavery it currently still exists under, by trading oil based on GOLD, an ACTUAL ASSET, as opposed to this flim-flam, Nothing-Backed US DOLLAR. Theres your true motive everyone. Never just accept the narrative you are told. Especially when the narrator has a global timeless vested interest in you beleiving their story, as opposed to knowing the truth.